The title of this post is the title of the latest book by my friend Will Buckingham (with the subtitle ‘Imaginings and Incantations in Indonesia’). I started reading it one night this week, and finished it the following day on train journeys to and from Cambridge. Quite a surreal way/place to read it, it turns out. I left the train at a point at which Will was on death’s door having refused an injection, and worried all day about what would happen to him. So it was a relief to get back on the train (after a day of Gormley, Tutankamun and Louise Bourgeois) to find out what happened next.

It is an absolute joy to read. It made me laugh out loud, cry, wonder, want to know more, want to go off to new places… All the things that a gripping – but real – book should be. I love it. It describes Will’s encounters in the 1990s – with people, sculptures, witches, octopuses, histories, insects, ancestors, weather, travellers, anthropologists, illnesses and medicines – I suppose really with life and death – in the remote Indonesian Tanimbar islands. Which I had never even heard of before I started this book. 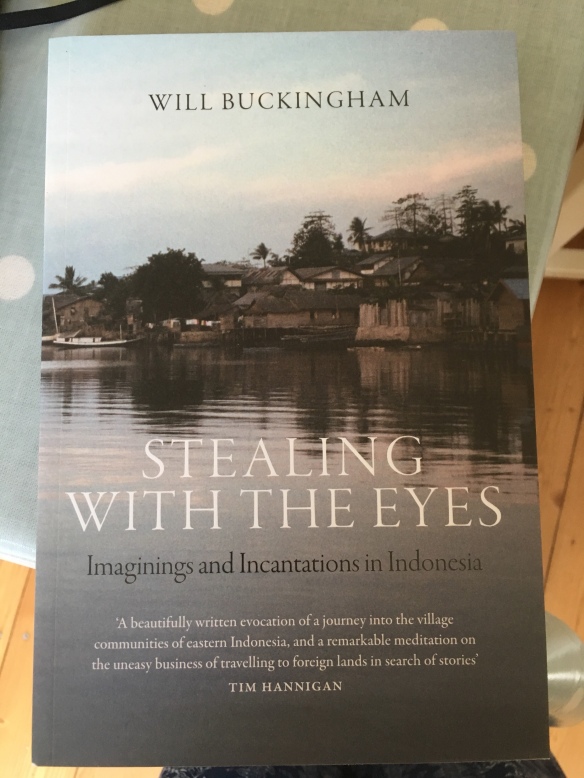 But above all, it describes a growing concern with the (colonial?) activity of the anthropologist. The title ‘stealing with the eyes’ is a phrase used by one of the people Will meets, sculptor Matias Fatruan, from a place called Ruma Salut on the island of Sera, to describe what he sees outsiders doing when they come to ask questions, take photos, record conversations. How can an outsider ever understand the ways and lives of others, not least when they are entwined with the place, with the ancestors?

Anthropologists are not immune to fantasies of the exotic, even if anthropology has a hard time owning up to that fact… I, too, am guilty. And recognising the fact does not diminish my guilt. Perhaps it augments it. (Buckingham 2018, p.177)

It has made me think hard about my own research in India and my ambitions to return. Perhaps the only way to travel and to explore, is to do exactly that – to see what happens with no agenda? I’m not sure. There’s always bound to be a ‘failure’ in any sort of anthropological endeavour. But there’s still an absolute desire in me to go back and do some more exploring, meeting people, going to new places. But I think this is not because I think we can ever fully understand anything – but because we absolutely can *never* understand it. Going to an unfamiliar place is a way to recognise this. That we cannot know. We can just encounter things and see what happens. (And now am I sounding greedy, pretentious, privileged and like all of those distasteful things about anthropology…?)

Anyway, I highly recommend a read of Will’s book. I might have to read it again now. And think about new adventures.

In the LV at school (Year 9), I was somewhat rebellious. I still love my 13-year-old self. Part class clown needing attention, part provocateur needing to challenge authority. And perhaps because of this, I like the word ‘defiant’. I think teachers used it of me, with deliberate negative connotations. But I took it and owned it. I was defiant and I was proud of being so.

At about this time (actually I think it was the start of the MV/Y10), we read Ray Bradbury’s Fahrenheit 451 in our English lessons with Mrs King. The impact of this book was transformative. That books were ordered to be burned in some kind of dystopian totalitarian state was quite possibly the most shocking thing I had ever read. It was the job of firemen to burn books. How on earth could that be? Until the fireman called Montag was defiant. People rebelled. They learnt the books off by heart. And it was reading this that made me realise that books – or the things in them – change the world, and that learning was the most important thing there is.

So, going to see brilliantly titled The Word Defiant at Blickling Hall had a fair bit to live up to. It’s part of the ACE funded Trust New Art scheme, designed to open and shake things up a bit for new audiences, and is on until 28 October 2018. Theatre Company, Les Enfants Terribles have been commissioned to respond to what is the National Trust’s largest book collection in one of their house libraries. The library is about to undergo a massive conservation programme, and this intervention highlights the plights of books – both their environmental destruction, but also contemporary issues around censorship, banning, destruction through war and violence, natural damage,and threat to books by digital technologies.

From the hushed audio of Chinese people reciting Winnie the Pooh (who knew this book was banned in China?), to an overflowing bath representing a library in Venice where books are stored in baths to prevent flood damage, to a stunning newly opened up room in the cellars full of burnt books representing the ISIS destruction of the library in Mosul, Iraq, this is such a thought-provoking, challenging and captivating creative response – it brings the house alive. I will remember the house because of this: it will not get muddled into a sea of other National Trust properties with their expected walk through dining rooms, four-poster beds, comical loos, and kitchens downstairs.

At the end of the house, the library awaits, its books spilling out of the shelves and onto the floor. Living? I love the way that the latter times I have visited, more interpretation has been added – as if to explain themselves to the visitors who don’t like this novel approach to story-telling and getting people to think.

One of my favourite things about this exhibition is the very mixed visitor response. Downstairs, an interpretation room has brilliant creative tasks. A redaction table taking its cue from a morse coded installation in the kitchen corridor.

A giant scroll for visitor conversations. It would be amazing to evaluate this. I’ve been to visit on three separate occasions, and alas, the grumpy comments of the traditional National Trust going visitors have always outweighed the positive ones. People seem to be quite irate that books have been used, that the house has been contaminated with an artistic intervention, that they can no longer contemplate the great works of art on the walls and rooms stuffed full of antique furniture. I’ve also enjoyed talking to the volunteers – again, with very mixed views. Some of them, I notice don’t even talk about it, but steer conversations onto the actual books in the actual library. I love this almost as much as I love the installation itself. Here are some of the nicer comments I saw:

Extraordinarily, this is an intervention by a theatre company. Amongst many other things, it leaves me wondering where the boundary is between this and contemporary art. Let’s have more of this sort of thing. Shaking things up. Being defiant.

I think I need to read Fahrenheit 451 again.

I am currently in a state of flux. An adventure awaits, journeys to places, pastures new. I’ve left one thing behind and am toying with several exciting ideas about what comes next, whilst trying to enjoy the moment as much as I can.

We are constantly learning. Only this week, I went on an amazing course on how to make Mud Resist Textiles, at Print to the People in Norwich. Our teacher was the fantastic Sevanti Roy, now living in Norwich, but formerly working in Jaipur for textile companies including Anokhi, FabIndia and East. She’s what a good teacher should be: inspiring, trusting and allowing people to get on and learn for themselves. It was brilliant. A bit hot and sweaty, but brilliant.

Anyone who knows me, knows that I have a lot of objects.  Things collected, found, bought, given. I took several of these along with me to see whether they would make interesting prints. I quite liked the combination of natural laurel leaf, plastic lids and door knob, bobbin and small Indian printing block (not for mud resist though, which needs to use bigger blocks with larger negative spaces). And circles were the theme of the day. I love the accidental seepage of indigo dye into mud, leaving a sort of marbled effect. I’m looking forward to making up the recipe for myself and experimenting with my laurel hedge… Is this the start of something?

It’s funny how links to India pop up all over the place. The weekend before, I had kindly been invited by colleagues from Norfolk Museums Service to participate in a visit by three international participants from National Museums on the British Museum’s ITP scheme to Blickling Hall, to see ‘The Word Defiant’ (my third visit to this wonderful intervention by theatre company Les Enfants Terribles – another blog post on that forthcoming). It’s a small world: one of the visitors, Suruchika, works at the National Museum in Delhi which is also home to the National Museum Institute where I’ve worked. Needless to say, we had several friends and colleagues in common, and again, an idea began to spark. 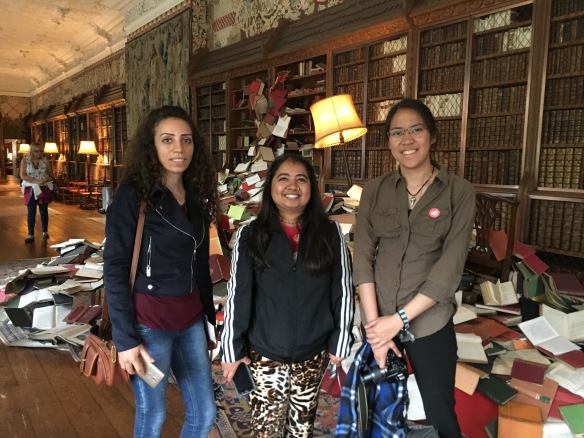 So, although I’m not quite sure what will be next, I’m making the most of opportunities to get out and about, meet new people, think new thoughts, learn new things, and dream: que sera sera.