Last night I went to an absolutely brilliant event called ‘Faith and Fear in Philadelphia’ which was held at Sheffield’s lovely little art deco Library Theatre. Shamefully, I had never been there before, but it’s a wonderful venue which feels intimate yet has plenty of space for an audience of about 250. It was part of the excellent series of ‘In The City’ events, managed by my friend and former colleague, Amy Ryall, from the University of Sheffield’s Arts Enterprise team and organised by graduate intern, Nick Potter.

The month-long series of events is all about celebrating interesting and usually quirky collaborations between academics and others (I am not going to use the term ‘non-academics’), and engaging the public with these ‘non-traditional’ creative research projects. Public engagement is of course a big buzz word within universities (and many other institutions), at danger of just being another tick box exercise for the REF or for funders, but it strikes me that Sheffield’s approach is a really dynamic and creative one, in which risks are taken, projects are often shared in their incomplete and raw stages as processes rather than products, and playful and fun ways of doing new things are encouraged. It feels really fresh and as though these are projects that really matter.

So last night’s event ‘Faith and Fear in Philadelphia’ was a fascinating collaboration between academic historians and musicians from Americana band The Payroll Union who had come together to explore how we tell stories about the past, and particularly the history of Philadelphia in about 1840. Not a traditional gig, the evening began with various historians and musicians in conversation. They discussed similarities between the business of academic history and of music – or rather, song-writing. I was intrigued that most of these conversations focussed purely on narrative: both history and song were seen as story-telling devices, just different ways of interpreting people’s tales, or modes of research. While I agree with this to a certain extent, I think there are problems with making such a comparison. Not least the fact that (despite being a singer) I am generally not really someone who listens to lyrics of songs. So for me, they rarely tell a story unless I really really concentrate – and even then, the words might be blurred and misinterpreted. For me, I think there has to be something more than narrative in music. Of course some of the panel also pointed this out too: music is about emotional engagement. It does something utterly beyond narrative, beyond words. I can enjoy a song without having a clue what the words were. I was not sure if the same is true for history. Although as the evening developed, I think that thinking through history in an emotional way, rather than as it seemed, a series of facts, would certainly have made it more appealing to me when at school. I don’t really care what date something happened in, or even really what happened, but I am interested in how and why people responded to particular contexts.

Many of the comments in this discussion began “I am not a historian, but…” And this puzzled me. Why are we often so keen to identify ourselves through what we are not, rather than through what we are? I am not a historian, but… But more significantly, I found the implied separation between the ‘academic’ and the ‘creative practitioner’ quite problematic. There are hierarchical and value-based judgements at play here. Is the story-telling of the historian deemed more rigorous, or better, than that of the musician? Of course I think this project is working hard to break down what I would argue are false notions of a dichotomy between research and practice, the academic and the creative. But these things die hard. Why does it matter if I am not a historian? We are all storytellers.

So it was when the amazing Payroll Union began playing the 13 songs that they have written for this project, that I really began thinking even more. What a fantastic idea to not only be given the lyrics of the songs in the programme, to read through and learn from – but also to have these lyrics footnoted! A stroke of genius, and one that I really wish would catch on. Song writers are just that: writers, poets, storytellers – as well as being musicians. So to miss out on half their creation through not knowing what the words are, seems sad. Writing songs is a real craft, and here, the songs have been so deeply researched using historical documents, first person accounts, interviews, maps, that it was amazing to be able to read and take in the detail through this brilliant programme. I actually learnt more about American history and the city of Philadelphia last night – because of these lyrics – than I had ever known before. And it didn’t matter that they were imagined characters, not ‘factual’: in fact this made it all the more ‘real’. Better than history.

What I am not sure of though, is whether I learnt about the history through the music itself. The band is brilliant – fabulously talented musicians with great energy, passion – and the songs are fantastic. I loved them. I would have loved this gig even if I had no idea what the words were about, because the music grabbed me. If I had been at the End of the Road Festival, I could have listened to this all afternoon. But I wouldn’t have learnt anything about Philadelphia. And as the band themselves stated, the music itself is not authentic, for there are no recordings and no way of knowing what folk songs would have sounded like then. What is authenticity?

So here, I have questions again about the distinctions between academic research and creative practice… Where are the similarities in the ways of knowing? In ways of understanding the authentic? If I wrote a song about Einstein’s Theory of Relativity, would that be doing the same sort of thing as this project did? Or if I made a collage of how I imagine Moyamensing, would that have been doing something similar? What is unique about a historian working with a musician? How would this project have differed if a photographer or visual artist were the collaborating partner? Yes, the outcomes would have looked different, told different stories, but they would have still told stories. I always end up with more questions than answers.

Anyway, whatever these are, it was brilliant, thought-provoking, inspiring – and amazing music. I look forward to buying my copy of the album and reading the lyrics at the same time. And I do hope that more bands will start sharing lyrics – with footnotes – at their gigs.

Today I am going to London to the Institute of Making, to take part in a workshop for postgraduate researchers, entitled ‘Restoration’. We have been asked to bring with us a broken book, one in need of restoration. I have brought three such books with me: two belonged to my grandmother and one belonged to her sister, my great aunt. The one I am hoping to work on this afternoon is my grandmother’s handwritten recipe book, dated from April 15th 1939, and with her maiden name, Vera Illingworth, inscribed into it in that familiar rounded yet somewhat spidery handwriting – the handwriting of an infant school teacher. She would have been almost 24 when she started writing in here, and I wonder if it is some sort of preparation for marriage and setting up home, having to use lots of recipes as she would have cooked every day. I wonder whether she wrote it with her own mother, perhaps using that tried and tested Yorkshire cooking of mother. 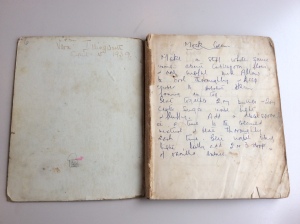 It is a wonderful document of social history in itself. The first recipe is for ‘mock cream’ – perhaps the real thing being unavailable during the war years? A white roux sauce, with extra caster sugar and vanilla essence. I might try making it. The pages are covered in blots and splodges of ingredients, and the edging of the pages brown with grease from daily use and handling. Corn flour pudding, egg cutlets, and in another’s handwriting, rasin loaf, rice cake, lemon cake with a strange statement “They are called Lemon fingers” and then Granny’s own writing, ‘you “barmy beggar”‘!! No idea what this means or why it is in here in quotation marks. Some recipes follow from Mrs McMillan, whoever she was, including Wartime Steamed Pudding, made with self raising flour, suet, sugar, ginger, milk and vinegar. Sounds revolting. But also are Granny’s jam recipes – delicious and ones to remember to use – raspberry, plum and damson, strawberry, blackberry jelly, chutney, gooseberry. What is listed as Fruit Mousse, with an originator Aunty Roebuck (who I think kept chickens at Green Moor), is what Granny often made: I never really liked this combination of jelly and evaporated milk. And her delicious ginger biscuits too. Must make a batch of these. They are gorgeous and she always seemed to have a freshly baked tinful.
Behind the recipes are traces of other notes, additions in l.s.d. – no idea how to do such sums these days. Also inserted are cut out recipes from labels and magazines.
And as the book progresses, I think I recognised my mother’s writing – perhaps as a school girl, we have Aunty Marion’s sandwhich (sic) and Mrs Bond’s chocolate buns.
The back pages have a non recipe – the instructions for knitting a vest, followed by the months in which to sow, and how far apart to sow, various vegetables.
I now wonder, having read through while sitting on the train, whether the book actually started during Granny’s time training to be a teacher in Hull. I think this makes sense – it might be her domestic education notes perhaps, which she continued adding to over the next 30 years or so? Although I don’t think the dates tally, as she must have been younger than 24 when she did her teacher training. So perhaps my earlier thoughts, that it was just her recipe book, are more accurate. My mother might know.